Blog
You are here: Home / Blog / Production / ‘Two Hearts as One’: two stories, one film 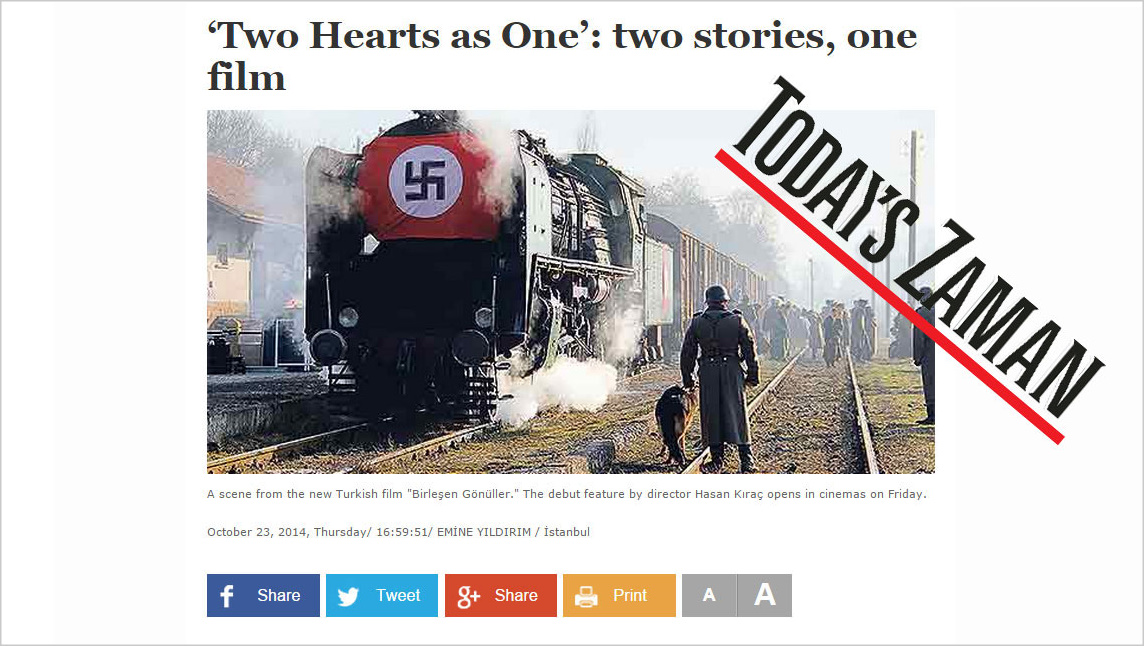 New period film “Birleşen Gönüller” (Two Hearts as One), one of the most expensive Turkish movies ever made, perhaps even surpassing the budget of Yılmaz Erdoğan’s “Kelebeğin Rüyası” (The Butterfly’s Dream), hits cinemas nationwide on Friday.

One thing is for sure about TV director Hasan Kıraç’s debut feature: It possesses some of the highest production values, and this is very important for period films, where the slightest mistake in detail can alienate an audience. Yet, despite all its cinematographic ambitions, the film lacks a strong narration and becomes trapped in the clutches of a screenplay that needs a lot of editing and cutting..

The film has two parallel storylines: The first takes place in the 1990s and the second in the 1940s, during the Nazi invasion of Caucasia. The story begins with the journey of Turkish teacher Yunus (Atılgan Gümüş), a man in his 40s who moves with his family to Almaty to open a Turkish school in what was then the capital of Kazakhstan. Yunus’s wife, Dilek (Yağmur Kaşifoğlu), is reluctant to move, since she doesn’t want to venture into foreign lands, but the family’s two children seem rather keen on the idea.

The family travels through the high mountains of the Caucasus region and reaches Almaty, then moves into a derelict house to the discontent of Dilek. But Yunus tries to convince her of their higher purpose — to bring quality education and enlightenment to the town. The family is helped by another local teacher and his mother, Ms. Cennet (Sema Çeyrekbaşı), an elderly woman who bears a great sadness in her heart.

Cut to a flashback sequence about Cennet’s story, in which we watch her festive wedding ceremony in the 1940s. Young Cennet (Hande Soral) is marrying the village heartthrob Niyaz (Serkan Şenalp). The viewer must assume that the two are deeply in love even though they are not shown a hint of a backstory. Unfortunately, the next day Niyaz is taken by the Soviet Army to join the military in the fight against the Germans. Niyaz is separated from his wife, and all he can think of amid the rubble of Stalingrad is getting back to her. (Credit where credit is due: The production design and CGI of the Stalingrad scenes are meticulously crafted.)

The village, meanwhile, is occupied by the Nazis and Cennet is sent to a labor camp. During the long and miserable train ride to the camp, Niyaz and Cennet find each other in a wagon — a scene accompanied by an overly dramatic melody from a violin’s strings.

Once in the camp, they set their minds on an escape plan, but all goes wrong — of course, for this is your typical Turkish melodrama. Niyaz ends up escaping and finding his way back to Turkey, but Cennet remains in the camp with their firstborn.

We then fast-forward to the 1990s, and see that Cennet is still waiting for the return of Niyaz, her one true love. We find out that Niyaz is now in İstanbul (it turns out that he’s somehow connected to friends of Yunus the teacher) and he’s also waiting for the day that he can find Cennet — he’s never gone back to Kazakhstan out of fear of going behind the Iron Curtain.

Luckily by this point in the film, the tragic love story has evolved into a touching one and the viewer really wants the elderly Niyaz (veteran actor Fikret Hakan) and Cennet reunite after all these years. Still, there is something a bit unconvincing about Niyaz: Why is a man who has enough courage to defeat a bunch of Germans in Stalingrad and escape a heavily guarded labor camp too scared to take back his wife, and why would he wait 40 years to see her again?

Once the two storylines connect, the film tries to merge the two themes — the eternal love between our now-elderly couple and the unconditional love and sacrifice that drive teacher Yunus to build his school while convincing his wife that they have a sacred mission. That these themes are presented to moviegoers in a film marked by an all-embracing atmosphere of tolerance and compassion deserves praise. However, the two themes do not have enough organic ties to be intertwined in this film. In addition, the constant use of melodramatic elements throughout is sometimes too much for the viewer to handle.

There’s a better film in here somewhere. If only there was a screenplay that was on par with the high-quality set design.